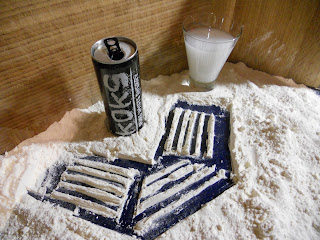 Firstly we would like to say that ,,koks” is the German word for cocaine.

Cocaine as a drug is well known. It’s a white powder for doping your consciousness. But it’s not necessary that you get addict of drugs for getting this effect. The Energy – Drink Koks is available on the market which has got similar characteristics. Koks is snow-white like the drug koks. This drink and his effects we are going to present to you today. At this point we would like to say a big thank-you to the Koks – team because they sent us the products for testing.

The ingredients of Koks energy aren’t the same as the ones in the drug:

And here are the most important nutritional values that 100ml provides:

We criticize this drink at the following criteria:

For testing this drink we put one can into the fridge and the other one we kept in a room with a normal room – temperature. Firstly we are reporting about the taste of  the warm drink and then what is different to the cold one.

How the producer promised us this drink is not a ‘normal’ Energy – Drink. If you taste this drink you will firstly notice a kind of the typical energy – taste, but directly after this the drink is developing his real taste. The aroma of corn sugar and lemon is coming through and dominates the whole drink. It’s a very likeable and fresh taste that is refreshing the consumer very much. At this point the carbon dioxide is another thing that supports the freshness. It’s as stronger as in other drinks but it perfectly goes with the rest of this drink. Furthermore there is to say that the lemon taste is as much stronger as the corn sugar taste.

At the aftertaste you only taste the citrus aroma which doesn’t stay there for a long time.
Now there is only left to tell you the changes of the taste if you drink Koks cold. We have got to say that the warm Koks was refreshing already, but the cold one is still more refreshing.

The design of the can is in a glossy black. At the front of the can you can see the logo of the concern. There are the words „koks – PURE WHITE ENERGY“ written in white of course. But the producer thought that that isn't similar enough to the "real" cocaine, so he wrote the words as they were formed out of "cocaine - lines". But the concern contrived one more highlight. All words are a little bit rough so that it feels like there is cocaine-powder on the can.

Koks Energy’s effect is of course not the same as the real cocaine but you feel that you get awake even it is not strongly.

To sum up, we would say that Koks – Energy is something special. Because of its extraordinary name that you immediately associate with the drug cocaine, everyone would like to test this drink if he sees it in the supermarket. Everyone has to test this drink one time, as it has a taste that is something special at the whole market. If you are consuming this drink very cold it is the perfect summer – drink because it is refreshing you very much and keeps you awake. But the aspect of keeping awake is individual, so it can’t be weighted very much.

With this Energy – Drink you can also mix very well and create a drink that is best for you. We tried to create our own drinks and that are the results (only available in German) :

All in all it is an interesting drink that everyone has to test in his live. But you have to be careful; this drink can make you addicted ;)

Here is the link to the official website of Koks:

Here is their facebookpage: